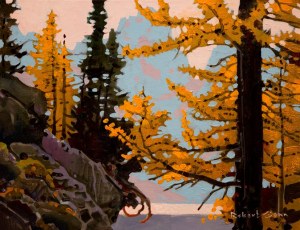 “For those many among us who would aim toward quality, there are standards. Performance in fine art is also measurable. For what it’s worth, here’s some moxie: Be a perennial student. Know what “brilliant” looks like. Be a discriminating connoisseur. Be both passionate and particular. Destroy your substandard work. Determine your own laws. Give up sleep.” ~ Robert Genn

Robert Genn is a Canadian artist of some renown, and his words here strike a particular chord with me. In a post today on his website The Painter’s Keys  he talks about a phenomenon known as “inner authority”. It’s a new term for a growing trend among burgeoning artists to disregard the conventions and traditions and standards of the past in favour of their own sense of worth and entitlement. What was once a discerning medium, such as fine art, has been paved over by artists (writers and musicians included) who are looking for a quick fix to get famous. They decry they old standards as tedious and lumbering, and designate themselves as avant-garde and new-age, and if you don’t get their work, you’re shouted down and told you just don’t have the eye for it.

The great John Simon went into the topic at some length during an interview with Jon Winokur, in which he described the degradation of modern art, comparing it to something a child might produce. This is certainly true for modern authors, where the average adult reading level is roughly that of a sixth grader. How can the mind bending prose of London and Conrad compete with a modern attention span? Improving yourself, creating something worthwhile is a herculean effort that, as Robert Genn suggests, should be a perennial task. Cristian Mihai questions what the nature of art is, exactly, in his blog here. He asks if an artist simply calling his work “art” is enough for something to be art. It’s an eternal question, but perhaps “art” and “good art” are more easily distinguishable. Maybe this is the real question. But how to define it?

In my previous post about Lena Dunham‘s new found success as an author, I give a perfect example of a person with an aptitude for giving the people what they want, supplanting innumerous works of quality. The only real consolation is the thought that something meaningful, worthwhile and intelligent will at least have a quality of endurance about it. I’m pretty sure that long after Miss Dunham has died and is forgotten, high schoolers will still be reading Dickens and George Orwell. It just doesn’t do us struggling artists much good to hope for fame after death.

The only advice I have, the same that I keep telling myself, is that if something is good enough, it will shine through. Destroy your substandard work, as Genn says. Put out only your best, no matter what it is. Don’t take the quick and easy route and make shortcuts for yourself or refuse to accept criticism because you think that nobody “gets” what you’re about. No. Tear it down, break apart what you’ve down, be open to critique and accept that you aren’t the next Faulkner. You may be good, but you aren’t impervious to error, and once you accept that, you’ll begin the road towards making some truly great art.

One thought on “Give Up Sleep”