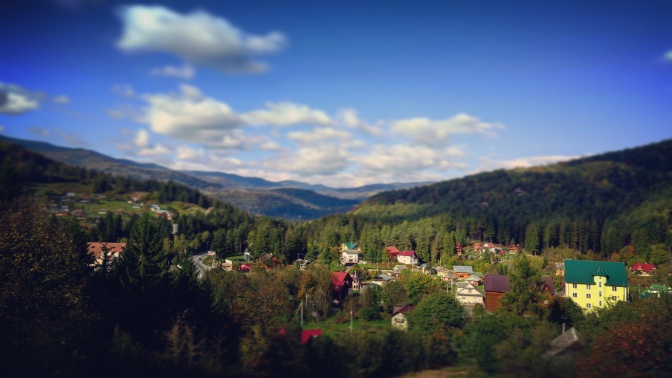 Sitting here in Starbucks, wrapping it up.

Prague, that is. This is my third and final night here. I flew in on a total whim. Traveling out of Ukraine can apparently be very difficult. I thought driving down into Yaremche would be a breeze, but it was a total dead-end, and the only way out was back up the way I came–back to Lviv. That was a hard pill to swallow, especially since my time here is very limited, and I didn’t want to waste any of it retracing my steps. Especially when it meant that I wouldn’t be able to visit nearly all of the other places I’d planned on seeing in Romania and Bulgaria. I thought I had Romania in the bag! Even if I couldn’t visit both of Dracula’s castles, I’d get to see at least one!

Sigh. It was not in the cards. Driving to Romania, flying to Romania–it’s all the same. No good. There were no convenient flights from Lviv, which was the only airport that had any flights anywhere at all.

So with a heavy heart, I got to the airport at Lviv and prepared to buy my ticket to Istanbul, forgoing the five countries I’d planned on seeing, and settling for a meager two. Two cool countries! But still. Two. That’s a lot less than five, for those of you who are counting. 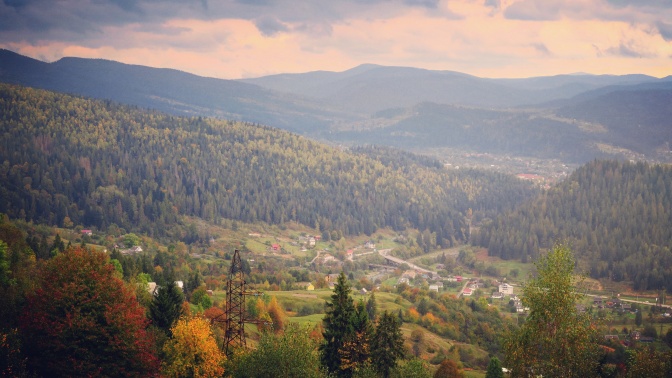 I can’t complain about Yaremche. On the contrary, it turned out to be one of the absolute highlights of the trip. In a trip that is so far chalk full of highlights. The night I arrived, I walked over to the hotel restaurant, and bumped into the owner–a bright-eyed young guy named Leonid. After grabbing some dinner featuring a local delicacy called varenyky, consisting of these dumplings stuffed with cheese made by these local mountain shepherds called the Hutsul, I found myself invited on a hike into the mountains the next morning.

That didn’t sound remotely interesting, so I said no. (I’m lying.)

What a perfect opportunity! It’s exactly why I had come to Yaremche in the first place.

So the next morning I arrived at the appointed time of 11:00 sharp, to find my host had left a message urging me to meet him at 2 instead. He’d been downing shots of whiskey like water when I arrived, so I put two and two together and decided to go for a walk. 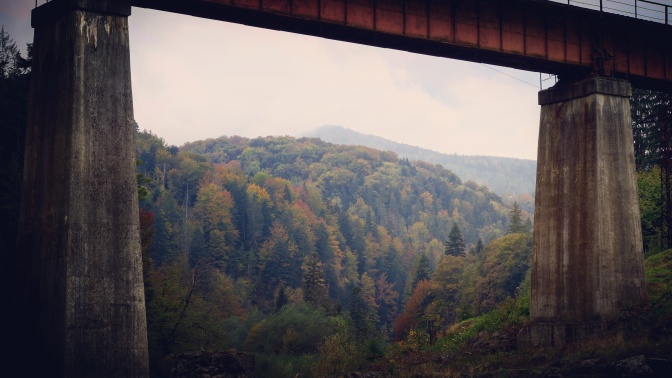 There was a charming little river that I walked to, and snapped some great pics of the fall foliage. I was about to cross under a railroad bridge when an armed soldier pointed his gun at me and indicated I should turn back. It was at that moment I realized I was tired of walking that direction anyways.

14:00 rolls around, and I meet up with Leonid, his lovely sister Uliana, their handsome Bernese mountain dog Nelson (after Admiral Nelson, they informed me), and Leonid’s daughter, as well as another family friend and his daughter. It was an entire troop! I was excited.

We set off into the darkened pines at a brisk pace, with Nelson bounding off and heroically leading the way. We kept up a pretty good walk, climbing ever higher for the next two hours, until we reached a jaw-dropping summit, rising majestically between two sprawling valleys far below. I’m not sure what our elevation was, but the view was most impressive. Yaremche lay in one direction, and a town whose name is lost to me drifted off in the other direction. 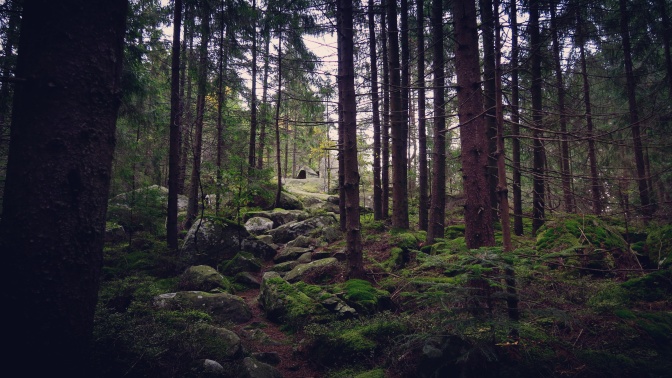 The nomadic Hutsul shepherds were nowhere to be found, though Leonid assured me they had been there last week. I guess they move about a lot. If you’re grazing sheep, that would make sense.

The trip was totally worth it though. This was the nature I’d been after. Man may build cathedrals, but they’re nothing to the vaulted ceiling of the open sky, and the yawning halls of mighty forests stretching across the hazy blue horizon. Man is only a poor substitute for the architect who lays the fields and hills.

We made it back, and after Leonid treated me to another delicious meal and then spent the better part of two hours, along with his sister and eventually another friend, helping me figure out how to get from Yaremche down to Romania. It would involve several hours of driving, a train ride, a bus, and the intervention of God Almighty, but it was possible. However, they insisted most vigorously that Romania was the destination of madmen, and that unless I earnestly intended to become the target of gypsy vagabonds, I had best set my sights elsewhere. Budapest, for example!

So I tried to get to Budapest, but alas, the fates conspired against me. There was just no leaving Ukraine. I had to get back to Lviv, in any case, and after that, it seemed like my best option was to just give up and head to Istanbul, abandoning all hope of seeing anything in between. 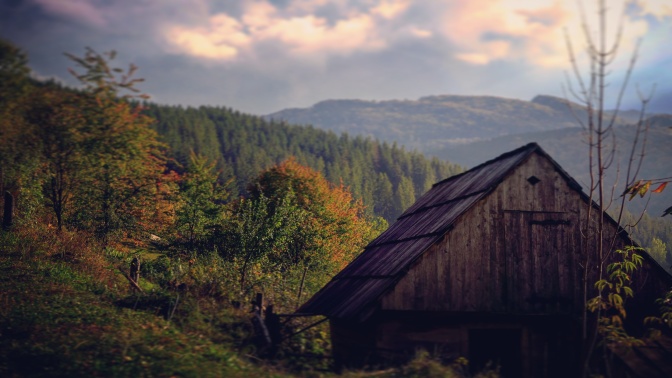 After generously giving me a ride in his own car to the next town an hour away, Leonid arranged for another taxi to take me back to Lviv. It was a long ride, which I’ve detailed in my video blog of the events. But, as I walked to the terminal to buy my tickets to Turkey, I asked the lady at the counter what it would take to get me to Budapest. She said it was easy! Just a $600 ticket. It sounds absurd, but at that point, I was so disappointed that I hadn’t seen more, I was about to spring for it. One final, desperate thought occurred to me: Prague.

What about it, I asked her. She did some quick number crunching, and a twinkle came into her eye. Vicky, her name was–I’ll never forget it. She was my savior angel that day. She said, I’ve done some tweaking, but if you want to go to Prague, I can get you there in two hours. That was it. The words I’d been longing to hear. Why had it been so difficult to get anywhere else? Why was Budapest shrouded in a no-fly, no-train, no-bus zone? Many flights and trains took over 24 hours to get there. And it’s only 330 miles from Lviv. For comparison, that’s almost exactly the distance from San Diego to Phoenix (356 miles to 354), and that’s just a 45 minute flight!

But no matter. My mind was made up, and my fate was sealed–I was going to Prague.

Despite an hour delay, what followed was the simplest, easiest two flights I’ve ever had. Why had it been so hard before? I don’t get it. But that’s in the past. 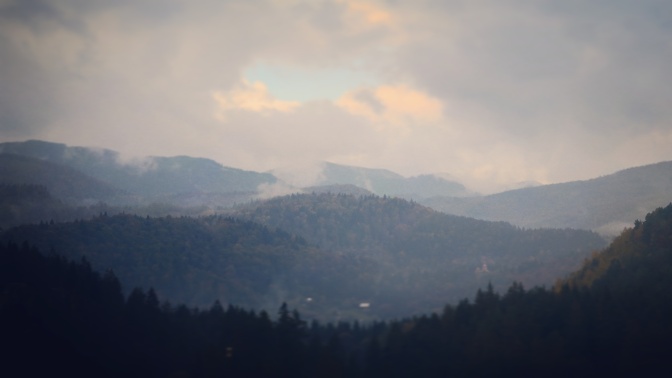 I arrived in Prague, my heart leaping every which way. It was a city cloaked in mystery to me. I knew next to nothing about it, but I was on my way, and I was determined to learn every one of its marvelous secrets.