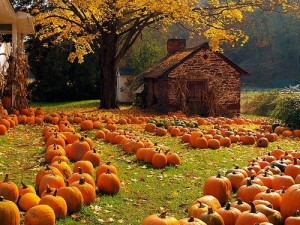 In many parts of the country, the leaves are beginning to change, and there’s a crisp nip in the air. In the small town in Ohio where I grew up, the skies are turning a little paler, hints of icy white clouds suggesting the snows to come. Corn fields are ripening, the green stalks of summer turning brown. Farmers set up carts along the road side with gourds and pumpkins for sale, and a little wooden coin box you can leave your money in. At my old brick elementary school from the 1800s, kids are getting ready for the annual Halloween costume parade, and decorations are going up in the windows.

At my old house in the forest, summer leaves are beginning to fall, and the smell of the wet earth in the morning is intoxicating. The creek is full of the autumn rains, and wet logs bloom with little mushrooms. Spiders weave their webs between the branches of trees, and the enchanted woods are filled with an air of mystery. It’s a bewitching time of year, and one I’ll always remember fondly.

That’s happening in many parts of the country, but not here in southern California.

The sun is still shining, it’s still 75 degrees, and the sky is as blue as ever. The only indicator Halloween is approaching is the decorations in the stores. Plastic pumpkins and “Fall Leaf” collection sets are tragic reminders of a childhood I often miss.

I shouldn’t complain, it’s lovely here after all. But palm trees and yucca plants aren’t in my blood. I yearn for the smell of wet leaves and harvested corn fields, and brick streets and old Victorian houses with sagging porches and stone churches from the turn of the century. Someday I’ll head back. But for now, please allow me to indulge in a little nostalgia.

In the meantime, I’m getting back to work on my novel. Promoting it, that is. I’m still doing the research for the sequel. At this point, that amounts largely to reading as many books as I can get my hands on. There was about a ten month period where I didn’t read any books at all, and it was starting to get to me. Work got in the way, and I didn’t have a chance to sit down and take care of business. But I’m remedying that right now. In the last month I’ve tackled “The Black Company” by Glen Cook, “To Have and Have Not” by our dear friend Hemingway, “The Name of the Wind” by Patrick Rothfuss, “Foundation” by Isaac Asimov, and now finally “Stranger in a Strange Land” by Robert Heinlein. I’m also concurrently reading “Storm of Swords”, the third novel in the Game of Thrones series, but we all know what that’s about so no surprises there.

I’ll save the reviews for another time, suffice it to say this was my introduction to Asimov, and I wasn’t a huge fan. It was an intriguing book, but I felt the writing style was too simplistic. And as far as Patrick Rothfuss goes, I don’t get it. The book was entertaining, but I can’t call him a good writer. Judging from reviews on Amazon, I seem to be the only person on the planet who thinks that, so go ahead and call me crazy.

For my own book, I’m reading through the “2014 Literary Guide to Agents” and following some advice on brushing up my query letter. It’s an intimidating thing, like a handshake for your book. Here’s the reworked pitch I’ve come up with for today:

“In a gloomy temple high in the crag of a weathered mountain, an Asaani druid pours over a manuscript thick with dust. His limpid eyes scan the ancient texts, looking for some clue—some hint that he might be mistaken. His short, rasping breath is barely audible above the wind that moans around the rotting stone outside. Candlelight flickers over the yellowed scripts, cracking as his gnarled fingers fumble with the pages. He hopes he’s read the signs wrong. Turning another page he licks his thin lips, reading along in the words of a long forgotten tongue. He prays the prophecies are false. He must be mistaken—it cannot be true.

But the words are clear, set down in the aeons before even the mountains had roots. After ten thousand years, the Seven Regrets of the World are finally at an end. Turning a fearful eye to the window, the old man peers out at the white city of Chaldrea beyond, glittering and serene on its little green isle in the lake. Warnings will do no good, for who can stop the gods? Not the armies of the emperor, or his mighty fleet of imperial starships, can slow the coming storm. Not even the Mother of the Starborn can save the empire now. Victus—the Wandering Chaos—has returned. The line of emperors has fallen, and tomorrow, the world will end.”

Sound good? Is that a book you’d pick up and read? I’d really love to know. I’m going to be spending the next few weeks reading more books and working on my query letter, and hopefully polishing it as much as I can before I start making the rounds through sci-fi agents.

Between that and my full time job, I’m also going to attempt to keep this site regularly maintained, as well as my Twitter, Goodreads network, and Facebook author’s page. I’m also looking for a writer’s group to join here in San Diego. Where the hell does anyone find time for all of that? Throw in a committed relationship and you can kiss your free time goodbye. On the bright side, when my novel takes off, I won’t need my other job and can focus more time on this. Here’s to working for yourself!