So I want to try and keep these updates going daily, on top of my video blogging. Which will also hopefully be daily, barring any unforeseen calamities.

To bring you up to speed, that was the fastest weekend ever! I guess that happens when you take off Saturday morning, then spend the next 26 hours traveling, and wind up at your destination jet lagged at 4 in the afternoon. The flight out was less relaxing than I expected, but hey, it’s a flight, it doesn’t need to blow your mind. Although they did lose my camera tripod, which I’ll never forgive them for. I loved that little thing.

I arrived in JFK and wandered about for a bit, comfortable with my 2.5 hour layover. The plane was scheduled to leave at 5:45. So I set up camp and started recording some broll and other videos. At 5:00, I hear an announcement: “This is the final boarding call for KLM flight to Amsterdam. We’re departing now. If you’re not here, we’re leaving without you. God have mercy on your soul.”

Ok, I may have exaggerated that last bit, but that’s what I heard with that announcement. I looked at my stuff. My meticulously packed bag was spread out all over the counter. I was 30 gates away. How the hell was I going to make it? Who decided leaving 45 minutes early was a good idea?! I’ve never packed so fast, or carried so much in my arms, or run so fast with that much on my back in my life. I thought my lungs were going to explode, and when people saw me coming, you better believe they made way. I stopped at another counter and asked the ladies there to phone ahead and let my gate know I was not going to be stopped by a capricious captain’s whim to leave early.

I made it, breathless but just on time. Then, as I pull up, a man and a woman standing to the side say, “Ah, so you’re Pearson.” I was like, what’s it to you? They then pulled me to the side and began questioning me, politely, about my trip to Ukraine. Was I going anywhere else? Like Libya, or Syria, or Iraq… They wanted to know my entire itinerary, where I would be staying, where I was born, where I worked (and how do you spell that again?), if I was meeting anyone or traveling alone, where I would be in Turkey, where I was staying… If you ever feel like the government’s not paying attention to you, just try visiting a conflict zone.

Many hours later I arrived in Amsterdam, in what is possibly the cleanest, most efficient airport in the world. They have a lounge, complete with a jungle gym, baby grand piano, and personal massage chairs. I could elaborate, but I’ll let you imagine what other wonders were there. 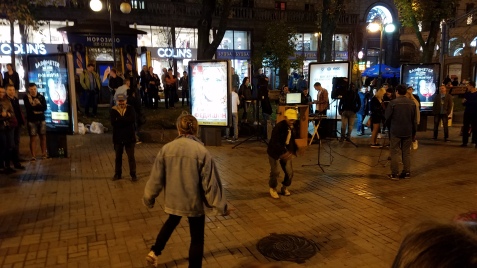 I then boarded the plane for the final leg of the trip, after anxiously sitting next to my departure gate and double and triple and quadruple checking that it was the right gate, and they were, in fact, leaving at 9:30, and not 8:45. Arriving in Kyiv (Russian’s spell it Kiev, but Ukrainian’s use Kyiv, and since it’s their city, I’ll use their spelling), it was overwhelmed with excitement. Everyone was speaking Russian! I’m not sure if you’ve noticed, but eastern European’s have a distinctive Slavic look, and it was really cool to see so many foreign faces. Just seeing them walk around speaking Russian felt like a thoroughly authentic and rewarding experience.

After filing a report that my tripod was missing, and having the polite Ukrainian lady tell me in broken English that there was “no hope” of ever finding it, and that “no one was going to look”, I left the airport, and was accosted by a line of taxi drivers, eager for my patronage. I was immediately skeptical, not to mention wary (the only place I’ve ever been pick-pocketed was in Russia, and Ukraine’s not a far cry from), I decided to go with one brutish, swarthy looking fellow. After using Google Translate to communicate with him, he assured me it would be ₴600 (that’s hryvnia), when I got in the car, he told me it would then be ₴800. We had a lively discussion about the matter, and finally settled on ₴600 once again. Over the course of the 45 kilometer, 30 minute ride from the airport, I learned his name was Sasha, he was 34 years old, had two children, and served in the military “fighting the damned Russians”. His English was very bad, but we managed alright.

Driving into Kyiv, I was struck by the enormous similarities to China. Grey, communist-era buildings crumbling everywhere, and obvious, rampant poverty setting the tone for the whole scene. Tacky signs and random billboards festooned the roads, with drivers going willy-nilly wherever they pleased in cars from brands you’ve never heard of.

But I didn’t care. I was in love with it all.

We arrived in Kyiv, and I caught a glimpse of glimmering, golden, onion-domed minarets shining above the distant forest covered hills. I was ecstatic. We rounded a corner, and suddenly there was Maidan square! I was nothing like I imagined. Bigger, smaller, longer, shorter, just different. I couldn’t believe it. The place I’ve been reporting about for years was finally here, right in front of me. The center of all the action during the recent civil war–the fighting and protests and deaths. Right there.

And my hotel was at the opposite end of the square from the famous statue, facing the main pavilion. Unbelievable! What luck!

After learning the hotel only took cash, I spent the next half hour trying to find a bank that would accept my card, and then booked my room from a very helpful and attractive raven-haired girl with green eyes. My room now faces a side street, but if I lean out the window, I can see Maidan square.

I took a nap, then hit the streets for a bizarre evening scene. On Sunday, apparently, they close the main street around Maidan, opening it up to performers and vendors with little carts. I encountered huge groups of people, crowding around unusual music, and when I pushed my way through the horde expecting to see something… I don’t know what. Amazing, I guess. I found instead a sort of impromptu karaoke show, where people were singing along with a portable karaoke machine, and old people were dancing in the street. Young people–in their teens and 20s–were standing around watching the spectacle entranced, as if David Copperfield were turning rocks into gold or something. It was the most bizarre, anti-climactic, and yet strangely charming scene I’ve come across in a while. Just old, poor people in babushkas dancing awkwardly and spinning in circles, while some gangly guy sang out of tune. It was wonderful. I loved it. I wanted more of it, it was so strange.

That scene repeated itself up and down the street, and I marveled at it for an hour or so, before finding Ukraine’s version of Subway and then calling it a night.